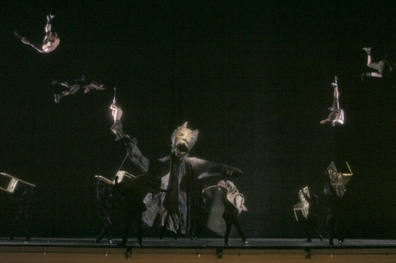 Take the sun from my heart
Let me learn to despise

In the closing pages of John Gardner's Grendel, Grendel -- our hero the monster -- is set upon by Beowulf -- our monster the hero -- who gets him into an ironclad armlock, smacks his head repeatedly against the wall of the meadhall and demands that he sing.  After trying sarcasm without success -- "Hooray for the hardness of walls!" -- Grendel sings:

The wall will fall to the wind as the windy hill
will fall, and all things thought in former times:
Nothing made remains, nor man remembers.
And these towns shall be called the shining towns!

In the closing minutes of Elliot Goldenthal's opera Grendel, as Grendel is on the verge of death, those same lines are given to the massed male and female chorus in what is probably the best sustained passage of intentionally attractive music in the work.  The moment serves nicely as a pin from which to hang my own impressions of the opera's premiere production, now concluded in Los Angeles and en route to New York for a four-performance run at Lincoln Center.

For the most part, I go along with the trend of the commentary compiled below:  As a production, it was impressive from beginning to end, with director Julie Taymor rolling out every trick in the theatrical book short of indoor fireworks.  Count it down: Masks?  Check.  Small puppets?  Check.  Really large puppets?  Check.  Scrims and strobes and projections?  Check.  Not to mention a huge smoke-snorting dragon's head with a diva on its tongue.  And a lightning fast dancing Beowulf -- albeit one with choreography undercut at a few points by its resemblance to a particularly cutthroat game of Charades.  As she has shown repeatedly in her career, Ms. Taymor knows how to achieve an impressive, resonant stage effect seemingly at will.

The singing actors and chorus were superb.  Eric Owens displayed range, strength, nuance and a wicked sense of humor in the title role.  Denyse Graves snarled and scoffed in high existential style as The Dragon.  [Oh! just once, though, won't LA Opera allow Ms. Graves a role in which she is not decked out as a grotesque?]

Elliot Goldenthal's score is . . . entirely functional, highly effective in short bursts, but not ultimately memorable -- although a handful of passages might become so if you heard them more than once.  [I have it on good authority, from my sister in the chorus, that the score does grow on one with repeated exposure.]  I would not object to hearing it again, but I don't know that I would go out of my way to listen to it on its own.

Musically, Grendel is not a self-consciously cutting edge piece, nor is it particularly backward looking.  While Goldenthal rarely goes out of his way to be openly melodic, neither does he insist on producing a willfully raw or ugly sound.  We're not in Pucciniland anymore, but we are in a relatively comfortable part of the forest of contemporary serious music.  In the realm of post-19th century opera, Grendel does not move terribly far beyond, say, Benjamin Britten in the use of dissonance -- we're not talking Berg or Schoenberg or even Janacek here -- and Goldenthal is adept at trotting out tonal colors from Wagner, Richard Strauss, and the more approachable theatrical work of John Adams or Philip Glass as needed.  All of those influences come in brief dollops, however, and the score never settles into a distinctive mode that we can say "is" the essential sound of Goldenthal or of Grendel.  (LA Opera's site provides a link to the composer's own notes on his approach to the score.)

The libretto credited to Julie Taymor and J.D. McClatchy works well largely because, by my estimate, some 90% or so is drawn directly from the text of Gardner's novel.  It is an effective adaptation for the same reason the John Huston's screenplay for The Maltese Falcon is effective: it is as much as anything a transcription of a strongly written original.  The quarrels I have with the Grendel libretto tend to be with those very few points where it strays from the novel, e.g., providing a childhood "back story" for Grendel involving his accidental dismembering of a playmate, adding in a dream sequence -- which looked wondrous even if it was totally unnecessary -- in which Grendel sails across the sky in a crystal boat serenading Hrothgar's queen not long before he almost dismembers her.   In these cases, there seems to have been a surrender in the direction of sentimentality, and Grendel is a decidedly unsentimental book.  On the whole, they are minor missteps and while it is easy to imagine how the libretto could have done much worse in translating its source to the stage, it would be difficult to make it much better.

If there are any New Yorkers reading this and wondering whether they should seek out tickets to the Lincoln Center run, my answer is "yes, you should."  Grendel is an imperfect opera, but its relative weakness musically is counterbalanced by the strength of its libretto and, in this production, by the commitment and high skill of the performers.  Grendel is more an impressively picturesque foothill than a towering pinnacle of the operatic art, but it is no self-indulgent embarrassment and can hold its head up respectably in company.

It will be interesting to see whether other companies and other directors will eventually try (or be permitted to try) their hands at Grendel.  A stage work "lives" only to the extent that it can be constantly restaged and rethought.  A badly conceived version of Shakespeare or Chekhov or Wagner can be acutely painful to sit through, but the fact that directors are attracted to re-mounting those works, even misguidedly or stupidly, confirms that the works themselves have established their long term value.  The standard dramatic and operatic repertoire consists, or should consist, of those dramas that can sustain repeated viewings through vastly differing lenses and still produce something essentially true.

One reason to hope for future productions is the issue of scale.  Grendel the novel is not an epic work: it comes in at fewer than 200 pages and consists of Grendel monologuing brilliantly, giving us a version of the life even now flashing before his eyes.  With Julie Taymor's eye-popping production, and Elliot Goldenthal's large-ensemble orchestration, this first performance version of Grendel the opera is in many ways just too ostentatiously Big.  An enterprising company could probably mount a more intimate version, a chamber Grendel, to good effect, allowing the audience to get closer and more personal with its complicated monster protagonist.  Of course, the Dragon would still have to be as big as the company can manage.  The Dragon demands and expects nothing less.

To conclude: I am happy to have seen and heard Grendel and I imagine that others will be also.  I am curious to see whether Grendel has what it takes to last once it leaves the hands of its creators, and I wish the poor old world-rim walking monster well.

[Giant Grendel puppet photo by Robert Millard, via LA Opera.  There are many more large, high-resolution photos where that came from.]

An interesting post-production tidbit:  The Los Angeles Times reports that Grendel acquitted itself well at the box office -- so much so that LA Opera is making tentative plans to bring it back at the start of the 2007-2008 season, if Eric Owens' performance schedule can be arranged so as to permit him to re-essay the title role.

The latter performances of this run sold out and Grendel not only managed to recoup the $300,000 lost by the cancellation of its May 27 premiere, it brought in $70,000 more than had been anticipated in the budget.  Opera traditionalists can take heart, though, from this statistic:

Despite its success, 'Grendel' was no 'La Traviata.'  A new production of the Verdi war horse — this one directed and designed by Marta Domingo, wife of company general director Plácido Domingo — ran in repertory with Goldenthal's opera.

'Basically, we're looking at making $150,000 better than projected for "Traviata,"' Baitzel says.  'Overall, our ticket revenue for the season will be three-quarters of a million in the black over our projected ticket revenue. We have no reason to complain.'

Also: Thanks to AC Douglas' Sounds & Fury and to Charles Downey of ionarts for their links to this weblog's earlier Grendel compilation post.

I'm glad you found the time to post your thoughts -- I've been wondering what you would think.

Enjoyed your intelligent and lucid comments re: Grendel. Just out of curiosity, did you have any difficulty with listening to a bass sing for the major part of the opera?

Excerpt from my blog on Grendel:

Although I enjoyed the dark themes and my personal vindication (I’m not the only one who empathizes with Grendel) I must admit I had trouble adjusting to hearing such a heavy voice predominate. I am much more accustomed to the traditional operatic canon in which tenors and sopranos prevail. I’m not criticizing the work; it is a thoughtful and unique rendering and appropriate for modern opera. However, I was listening to my own dark fugue and worried sick about my own little Grendel-monster at home.

To answer your question: I had no trouble at all with the dominance of Eric Owens' bass baritone, but that may be a matter of personal taste. My idiosyncratic view is that the most interesting roles in opera tend to be sung by baritones, basses and mezzos.

I have less patience with tenors and particularly with high-end sopranos, especially in roles that are largely built on filigree and showiness. There are some great sopranos in this world, and some great soprano roles, but I personally consider them the exception rather than the rule; pretty much the same for tenors, though I think there are more and better roles for them than for the poor denizens of the Soprano Songbird Ghetto.

So again, thanks for dropping by, and thanks for the opportunity to display my own oddities of taste.