Home Archives Profile Subscribe
Let This Be Thy Goal:
Shoot Thou Not the Cyber-Moose
Outside Over There

Ch. 1 -- In which We Begin in an Interrogative Mode

What kind of fool am I?

As has no doubt already been brought to your attentions, this, dear readers, is April Fool's Day.  As one who is a Fool on a semi-professional basis year round, this is an official holiday for me in my puckishly jesting capacity.  Just as laborers do not labor on Labor Day, and Christians take the day off on Christmas, and memoirists rest and recreate on Memorial Day, so April Fool's Day is a day for we Fools to drop tools and relax. That is what holidays are for.  Only that ridiculous groundhog is so ill-informed as to work on his day of honor, and I suspect that he could have negotiated his way out of it if only he had hired better counsel.

-- to which the aforementioned "Editor," cloaked in anonymity and wielding the awful power held by anonymous "bloggers" the world over, responded: "Well, why don't you post a pre-Blawg Review Blawg Review on April Fool's Day, when no one will expect it?  Oh, rah! what a lark!"  Or something to that effect.

So here we are: I present to you, as you idle your way through this Weekend of Foolery, The April Fool's Blawg Review Prequel, strewing roses in the pathway, as it were, of the real and non-foolish Blawg Review #51, which will appear with due sobriety on Monday, April 3, at Declarations and Exclusions.

Ch. 2 -- In Which Our Theme is Introduced and a Deity is Invoked

It is well settled that a Blawg Review, and even the ominous foreshadowing of a Blawg Review, must have a Theme, even if that Theme is Themelessness.  So we take as our text and the source for our theme across these two Blawg Review posts, this passage from Silke Tudor, writing in the San Francisco Weekly of April 4, 2001.

The Fool is the opening card in every tarot deck.  Often represented by the spring god Dionysus, the Fool demands a joyful willingness to take creative risks without concern for approval.  In nearly every spiritual tradition -- from the Zen Buddhists of Japan to the Kiowa of North America to Nordic and Celtic pagans -- the Fool is considered an elevated being: at its best, able to sublimate the mundane through wit and candor, and at its worst, chaos personified. 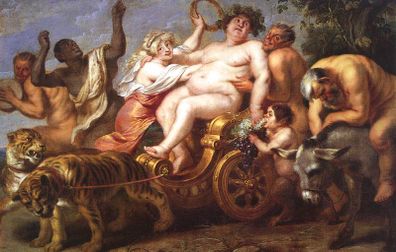 Our Theme, then, is the yinning, yanging, banging, clanging Nietzschean concatenation of the Dionysian and the Apollonian.  In my guise of fool, for this weekend I embrace the wily wine god, before my metamorphosis on Monday morning to the cool, Apollonian advocate of Deeply Serious Law with the posting of Blawg Review #51.

Come now, friends, let us stoop to folly together!  "The law is a ass," as they say, and here's some further proof from 'round the legal blogosphere:

Just because your idea is protected doesn't mean that it was a good idea to begin with.

Turn if you will to Daniel Wright's Patently Silly, for his report on the recently patented "Convertible Seat with Contoured-Front for Localized Body Heat Dispersion and Pressure Reduction" and learn, if you dare, the intimate details of how it accomplishes its promised result of

'. . . improving the physiological condition for sperm, and in turn, . . . increas[ing] sperm activity and . . . reduc[ing] the possibility of infertility.'

At Overlawyered, where we must allow as how he specializes in legal folly 365 days a year, Walter Olson explores new and fetching frontiers of intellectual property in "If I could sue like the animals":

Canadian photographer Gregory Colbert is starting an outfit he calls the Animal Copyright Foundation whose intent is to collect royalty payments on behalf of animal species as compensation for the use in advertising of, for instance, the Budweiser Clydesdales, Target's spotted dog, the Hartford's stag, and other furred, finned or feathered creatures....

See generally the compilation of copyrightable folly at Mother Jones magazine, "Intellectual Property Run Amok," which comes recommended by many, including without limitation Denise Howell at Between Lawyers.

Ch. 4 -- In which a Man Enrobed in Black Gestures Colorfully

Did you hear the one about Justice Scalia and his emphatically expressive hands?

Professor Althouse parses the Justice's explanatory letter in "'I am, by the way, an American jurist'":

If a reporter asks a question and gets only a hand gesture as a response, what exactly makes it read as 'jocular'?

And David Giacalone at f/k/a . . . . takes up the subject with the thoroughness -- he'll gladly define "goombah" for you -- and the Italianate sensibility one would expect in "dignity/schmignity: wordless italian with Nino Scalia":

Although Scalia disdains to cite to foreign legal sources, he quotes from Luigi Barzini's The Italians, in his own defense.

Ch. 5 -- In which That Big Box by the Interstate Comes to the Small Box on Your Prospective Client's Desk

Some years ago, before coming to my senses, I was heavily involved on the Marketing Committee of a then-thriving mid-size law firm.  During that time, I learned a valuable lesson:

"Some ideas are so bad that only a highly-paid consultant can come up with them for you."

If you have not learned that lesson yourself, perhaps you are wondering how your law firm can have a Really Cool Website that will attract all the Hip Hep Happenin' Clients you know are out there.  Wonder no more.

Thanks to a pointer from Tom Mighell, marvel at the possibilities as Tom Alleman shares the secrets of "Designing Your Law Firm's Site With Web-KEA":

So, in an effort to prevent neighbors from making further obscene gestures at my tailpipe, I am pleased to announce the rollout of Web-KEA, your one-stop all-inclusive Web site design source.  For a single all-inclusive fee, firms can have Web-KEA's slightly acclaimed Web designers create a Web site marginally different enough from your competition's site that you'll feel like you've really staked out your firm's identity in cyberspace.

How does Web-KEA do this?  Well, having had a daughter who worked at IKEA for a short period of time -- actually, we're pretty sure she's still in there somewhere, having taken up residence in one of the display homes they have set up in their ginormoultramegastore -- I am up-to-the-microsecond aware of the IKEA concept of modularity.

Modularity has worked for IKEA -- although it does not explain the tubes of cod roe paste, a spread for crackers that smells like a cross between 6-week-old herring and motor oil -- and it's going to work at Web-KEA, too. 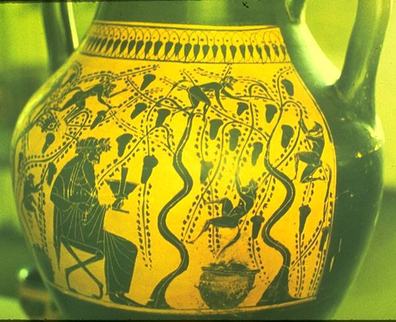 Ch. 6 -- In which Wine Is Consumed, and Litigated Over

Lawyers are not the only ones with law-related posts on their weblogs.  This would not be a properly Dionysian pre-Blawg Review without a touch of the grape, now would it?

So how do you save the market for cork? You dismantle the market all together. I'm pretty sure Franco would have appreciated this law.

-- and the ugly chemistry of "Divorce and Wine."  That last post leads to an actual legal weblog, Jeffrey Lalloway's California Divorce and Family Law, and to his post, "The new divorce battleground? The wine cellar":

Not every cellar custody battle tastes of the grapes of wrath.  Some couples simply and dispassionately disagree about how to appraise a collection, said Sally Gold, another Baltimore attorney who has handled several wine-drenched divorces. Even though wine is literally a liquid asset, it's difficult to appraise and divide.  Splitting a favorite case down the middle can diminish its market price, for instance, and it's hard to measure how some wines' worth will increase with time.

But, in mid-divorce at least, some bon vivants have little patience for legal niceties....

Ch. 7 -- In Which a Citizen and a Cyclist Engage in Vigorous Colloquy and a Manhunt is Launched

David Rossmiller, of the Portland, OR-based Insurance Coverage Blog, harks back to one of his first-ever weblog posts [original here] in "From The Nostalgia File", featuring video of "an enraged bus rider attacking a bicycle rider who had a dispute with a city bus":

Mind you, even though I come from North Dakota, where self-help is something of a cultural artifact, I am taking no sides in any of this.  Nor do I cast judgment on the propriety of any actions or pretend to  know anyone's motives --I merely comment on the appearances.  As a former journalist, however, I do note that the TV report provided in the link above was far out of sync with the thoughts of Portland residents about this incident and smacked of Big Brotherism to some people I spoke to.  Judging from comments on local blogs and letters to the editor of the local newspaper, the majority of people, including regular bicyclists, seemed not only to understand the bus rider's reaction, but to find it admirable as a kind of decisive, Jack Bauer-esque conduct.  One lawyer friend of mine, a reasonable, mild type of guy, said he hoped they didn't find 'the righteous bus rider.'  Some people observed that, since the incident took place on one of Portland's many bridges and the bike did not wind up in the Willamette, there was no real harm, in their view.  I do not endorse such sentiments, but I do note their existence. 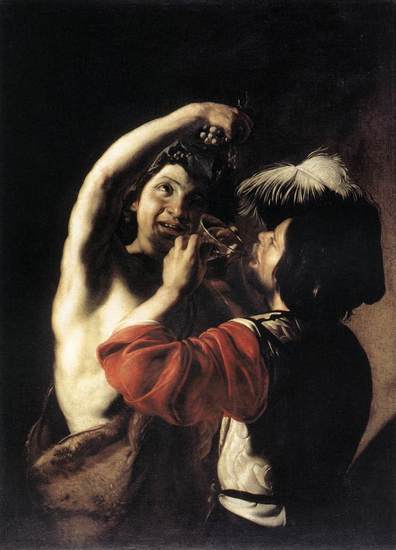 With that, we conclude today's edition of the April Fool's Blawg Review Prequel.  Please check back over the course of the Weekend, as there will likely be updates added as additional legal foolery rises to the surface.  Then, as a penance, please join us on Monday, April 3, at Decs&Excs for Blawg Review #51.

Thank you, and browse safely.

So where were those updates that I promised to post as the weekend went on?   Notwithstanding having been granted dispensation in the comments below, I succumbed to David Giacalone's proscription against April 1-inspired humor posts.  If you are still looking for that sort of thing, a good compilation of examples of the form from various legal and extra-legal weblogs has been posted by Bob Ambrogi, who declares: "What Fools These Bloggers Be!"

George, As an honorary gumbah of mine from way back, you are exempted from the Avoid April Foolery Policy I announced yesterday. Good luck.

I wanted, as a Chronic Fatigue Syndrome patient, to point out one very important reason why I rejected Ed's request that I switch to the April 3rd edition of Blawg Review, from my scheduled April 10th gig: We lose an hour of sleep on Sunday night. Glad it's you and not me trying to meet that deadline.

Thank you! I needed these laughs!

"The heart of a fool is in his mouth, but the mouth of a wise man is in his heart."
~ ~ ~ Benjamin Franklin

And you, my fine Fool, always have my heart!