Delightful news for Los Angeles-based fans of fin de siecle Viennese painting: five Gustav Klimt works looted by the Nazis, ownership of which was recently awarded -- to the chagrin of the Austrian government -- to the heirs of the looted family, will be placed on display at the Los Angeles County Museum of Art from April 4 through June 30.   An excerpt from the LACMA press release [PDF] on the exhibition:

'In gratitude to the City and County of Los Angeles,' stated [Bloch-Bauer heir and painting recipient] Maria Altmann, 'which provided me a home when I fled the Nazis, and whose courts enabled me to recover my family’s paintings at long last, I am very pleased that these wonderful paintings will be seen at LACMA.  It was always the wish of my uncle and aunt to make their collection available to the public.'

The earlier portrait, Adele Bloch-Bauer I (1907), one of the few extant paintings in Klimt’s groundbreaking gold style, portrays its elegant and intelligent subject as the ideal of feminine beauty.  The figure, now among the world’s most recognizable works of art, seems to dissolve into sumptuous gold patterning reminiscent of Byzantine art.  The second version, Adele Bloch-Bauer II (1912), abandons gold in favor of vivid colors.  Beechwood (1903), one of Klimt’s few woodland paintings, shares in the ideas of French Impressionism and is dominated by the brown and gray tones of the dried leaves of the forest floor.  His Apple Tree I is suffused with nuanced color and is among his most meditative paintings.  One of Klimt’s last landscapes, Houses in Unterach on Lake Atter, renders houses along Lake Attersee in an architectonic style. 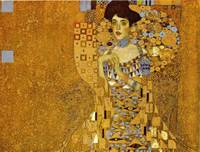 The exhibition is sure to raise questions about the possibility that the paintings might join the Los Angeles museum's permanent collection.

That will be up to the heirs, and no decision has been made, [Altmann's attorney Randol] Schoenberg said.

But the museum's staff can hope.  'Should there be some way to make this exhibition something that would be forever available,' [LACMA senior curator Stephanie] Barron said, 'that would be extraordinary.'

LACMA is, sadly, somewhat notorious for its skill at losing out on promising/anticipated bequests, so fingers must remain crossed for the time being.

And yes, I realize the Eddie Murphy joke in the post title is a bit of a stretch.  After all, every art historian knows that Gustav Klimt's real cinematic ambition was to be John Malkovich. 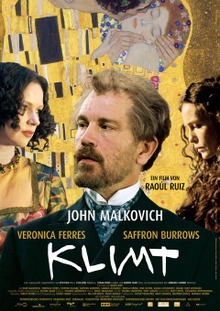