.  The answer is "Time," and it must be said that the riddle takes rather a negative and unappealing, if hardly nontraditional, view of its subject.  I am of a more cheerful and optimistic disposition, myself.

Today I begin to prepare to approach the entry to the period in which I will, eventually, draw near to the zone surrounding the penumbra of that era in which I expect, at some point, to find myself in proximity to the outskirts of the vicinity, or perhaps the environs, of the route that leads to those paths and meanders through which, in a slow and circumspect manner seasoned by the occasional sojourn on one appealing byway or another, it is to be expected that, in due time but in no great hurry, I will at the last arrive at the approximate mid-point of my early life.

In short today is my birthday.  Precisely which of my birthdays it is today may be deduced from the visual clue below: 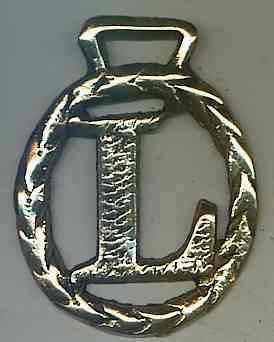 First, many many thanks to all of the kind commenters below and to those others who sent their links and wishes for this Occasion.   As I remarked in a comment at young Rick's Futurballa Blog:

Apropos of the Big L, see also the intriguing statistic posted this morning by Michael Blowhard:

Schenectadehuvian haikuiste David Giacalone observes that today (Dec. 9) is the saint's day for the relevantly-named 16th century Welsh martyr Saint John Roberts -- hanged, drawn, and quartered at Tyburn Dec. 10, 1610 (which cannot have been pleasurable), two fingers are Saint John's sole remaining remains, but that's the fault of the French Revolution.

Your Editor probably would not have remembered this date, except that it falls on the birthday of his [twin] brother . . . .

(Bracketed language in original.)  I have pondered this koan-like hint and can only conclude with:

~~~
Postscript:  Concerned that his ever-reexpanding focus on law-related topics at f/k/a/ was driving out haiku content, David recently launched two fresh Blogspot weblogs devoted solely to his passion for concise Japanese poetic forms: simply senryu and  dagosan's haiku diary.   He's much less coy, though perhaps somewhat more conflicted, about his birthday there and there.

Such pith; such wisdom. Have a great day, George, and halve a great century.

At age 50, everyone has the face he deserves.

The years between fifty and seventy are the hardest. You are always being asked to do things, and yet you are not decrepit enough to turn them down.

Happy birthday, George. Congratulations on your handsome face - the years have indeed been good to you (re Rick's remarks above) and vice versa. All the best in the world,

How spooky is it to open the comments and find that someone (Rick) has beat me to the punch in the choice of authors for appropriate birthday wishes?

...And indeed there will be time
To wonder, “Do I dare?” and, “Do I dare?”
Time to turn back and descend the stair,
With a bald spot in the middle of my hair—
[They will say: “How his hair is growing thin!”]
My morning coat, my collar mounting firmly to the chin,
My necktie rich and modest, but asserted by a simple pin—
[They will say: “But how his arms and legs are thin!”]
Do I dare
Disturb the universe?
In a minute there is time
For decisions and revisions which a minute will reverse.
The Love Song of Alfred J. Prufrock, T.S. Eliot

I am late to the party, but my wishes couldn't be more sincere: Happy Birthday, my favorite Fool!

J. Alfred Prufrock, if you please...

Must have gotten him confused with his cousin, Alfred J. Newman...

Patty, If you only knew the significance of Prufrock to George and myself, you would shudder in awe of your own clarivoyance.

Yes, Rick, Liz/Pattie is displaying those Awesome Texan Powers o' hers, little suspecting how close she has come to revealing the Terrible Secret that you and I literally [and literarily] first met one another over Prufrock.

I'm fixin' to have a fit o' the vapours just thinkin' about it.

Sorry I'm late, but I'm even older than you and it took a while to get here ...

Now my curiosity is commiting felicide...

I have been known on occasion to exhibit that ol' Sixth Sense. The frustrating part is I can't control it, I can't summon it at will, and it usually creeps me out when I do experience its effects...