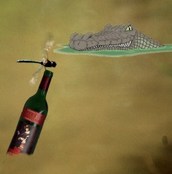 Is there nothing those Neo-Prohibitionists won't try?

Almost one in three people bitten by deadly saltwater crocodiles in Australia had been drinking alcohol before the animal attacked, new research has found.

An Australian review of unprovoked crocodile attacks on humans between 1971 and 2004 found that 29 percent of the 62 attacks had involved some alcohol consumption by the victim.

'About one-third of the people who had been attacked had actually been drinking alcohol,' study co-author Charlie Manolis told AFP Wednesday.

Stompin' in the Foothills

The Los Angeles Times Business section reported earlier this week on how the small wineries of the Sierra foothills are capitalizing on the recent liberalization of direct shipment laws.  Familiar villains rear their heads, however:

'If you can sell every drop of what you make out to the tasting-room door, through your wine club or by direct shipping, you will be king,' said Scott Klann, winemaker at Twisted Oak Winery, a small producer in the Calaveras County hamlet of Vallecito.

Already, the Sierra foothills wineries are seeing an increase in business from the gradual liberalization of the shipping rules.

Boeger Winery is on track to ship $65,000 worth of wine to out-of-state consumers this year, 30% ahead of last year.

Shipping companies such as FedEx Corp. are starting to supply small wineries with marketing materials such as 'Swirl, Sniff, Sip and Ship!' signs to remind tasting-room visitors that they can probably send any purchases home.  But increasing direct sales isn't as simple as just taking down someone's credit card number.

'There's all sorts of paperwork, the wineries have to collect and keep track of taxes, they have to keep statistics on how much they ship to a customer, and in some states they are going to have to buy special permits that won't be worth the cost unless they are selling a lot of wine there,' Insel said.  'But if they can conquer those hurdles, this is going to mean a lot of money to a lot of people.'

The Times, by the way, maintains a page devoted to aggregating its most recent Business stories on wine and the wine business.

A Sad Soap Opera at Sanford

Also from the LATimes, on the front page of today's Food section, a long report on why there's no Sanford at the Sanford Winery anymore.  Outside investors, big distributors, clashing philosophies, and organic farming are all involved.

Fred Wine Goes With Everything

I've been meaning to link this since early September:

The SF Weekly provides the most comprehensive profile I have yet seen of the man behind "Two-Buck Chuck," Fred Franzia.   Among other things, you can learn from this article