ROB:  Why, Max? It's a good name for you. Max, you see conspiracies in everything.

ALVY:  No, I don't!  You know, I was in a record store - listen to this - so there's this big tall blond crew-cutted guy and he's lookin' at me in a funny way and smiling and he's saying, 'Yes, we have a sale this week on Wagner.'  Wagner, Max, Wagner - so I know what he's really tryin' to tell me very significantly ... Wagner.

At the turn of the 21st Century, Los Angeles Opera announced ambitious plans to mount a complete production of Richard Wagner's Der Ring des Nibelungen, to be conducted by Kent Nagano and to incorporate designs and effects from George Lucas' Industrial Light & Magic.  That production should have come and gone by now, but 'twas not to be.  The LA Opera Ring cycle was first delayed by terrorism and a weakened economy, then apparently done in altogether by the scandal-tinged disappearance of a major source of funding. 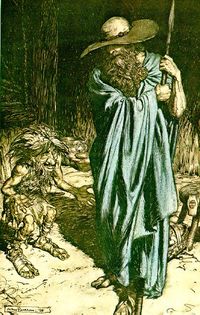 But all is not lost for Wagner-craving residents of the Greater Los Angeles Area.  The spunky and adventurous Long Beach Opera -- which has always aimed to emphasize opera as compelling theater -- has announced that it will offer a Ring cycle of sorts in January 2006.  And I, your intrepid albeit foolish cultural correspondent, will be there to report.

Although this will apparently be the closest Southern California has yet come to producing a Ring cycle, this will not be a full-on, as-Wagner-wrote-it, Ring.  Rather, Long Beach will present the "reduced" version devised by Jonathan Dove and Graham Vick for the Birmingham City Opera in the UK in the early 90's, slimming down the libretto's by about a third and reorchestrating the score for a significantly smaller orchestra.  (The performances will be staged in the intimate confines of the 825-seat Center Theater, which probably could not contain a full Wagner orchestra and an audience at the same time.)  Even in this diminished form, the cycle runs ten hours spread over two long days.

Researching further, I discovered that Long Beach Opera is mounting this production in conjunction with Opera Theater of Pittsburgh, and that the first two operas (The Rhinegold and The Valkyrie) were performed in Pittsburgh earlier in the month.  (The remaining two parts are scheduled for Pittsburgh next July, and will apparently get their premieres in Long Beach.)  The Pittsburgh Post-Gazette offered a preview (proposed photo caption: Wotan and Bruce Willis, separated at birth?) and has since published reviews of Rhinegold and Valkyrie (proposed photo caption: Ruffin' it with Mother Erda).  Production models and sketches from Pittsburgh can be seen here.

Southern California Wagner purists will be pleased to learn that the mighty Kirov Opera of St. Petersburg will be presenting a one-time-only "real" Ring cycle (presumably in German) over four days for the opening of the major new concert hall in Costa Mesa in September of 2006.

Gratuitous Additional Wagner Link:  Thanks to a link in the middle of a post on George Hunka's Superfluities weblog back in April, I found the strange and elaborate site maintained by German film director Hans-Juergen Syberberg.  That site incorporates a number of downloadable excerpts from his films, including the entire eleven and a half minute prelude (with puppets acting out the back story) that opens Syberberg's strange and elaborate version of Wagner's Parsifal.

Gratuitous Additional George Lucas Link:  Because you can find just about anything on the Net, there is no surprise in finding a lengthy analysis of the parallels between Star Wars and Wagner's Ring.  This excerpt is relevant to L.A. Opera's waylaid plans, mentioned in the opening paragraph of this post: