Home Archives Profile Subscribe
When You Drive in Your Car to Sip Fine Pinot Noir, C'Est L'Amour, Eh?
". . . and all our yeasterdays have lighted fools the whey to crusty death."

One day in the midst of the dark wood of the Internet, I discovered that the first feature-length motion picture ever produced in Italy was a 1911 silent version of Dante's Inferno, designed to emulate the famed illustrations of Gustave Doré.  What is more, the film has been released in Europe (alas, apparently not in North America) on DVD, in restored if not-quite-complete form and with the addition of a score by old guard German electronicists Tangerine Dream.

As in the Doré illustrations -- and, let's be honest, as in the original poem -- the film appears to consist of a series of tableaux of Virgil Showing Things to Dante.  As such, the material is well-suited to the theatre-style special effects that mark the early cinema.  Black and white, silent and patently artificial, the film looks to possess a magical/mystical quality that is difficult or impossible to achieve with contemporary digital methods.  (Cf. The Denis Dutton commentary on special effects that I quoted at length about a year ago.)

Variously sized streaming Quicktime versions of the film's trailer are available for viewing, as are selected stills. 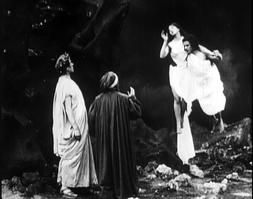 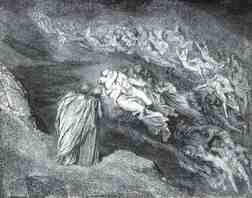 For comparison, I have reproduced parallel images from the film and Doré to the left and right.

Both depict that sad victim of the persuasive power of romantic literature, Francesca da Rimini (one of the few souls permitted by the filmmakers to wear clothing) and her fellow reader and paramour, Paolo Malatesta.

Special bonus for Paolo & Francesca fans: Joseph Cornell puts them in a box.

[Existence of L'Inferno discovered in the low-cultural depths of Harry Knowles' Ain't It Cool News.]

That is the world's longest trailer. I hardly need to see the film now.