Home Archives Profile Subscribe
As Above, So Bellow
Let's Dante

When You Drive in Your Car to Sip Fine Pinot Noir, C'Est L'Amour, Eh?

Tomorrow [Saturday, 4/9/05] we'll be spending the afternoon in a bright breezy field across the way from the Firestone winery, attending the 23rd Annual Santa Barbara County Vintners' Festival.   (Tickets may still be available.)   Not surprisingly, especially since it coincides with the film's release this past week on DVD, this year's event is themed around Sideways.   [Nope, still haven't seen it.]

Another film is stalking the wine world as we speak: the documentary, Mondovino.  Most commonly described as "the Fahrenheit 9/11 of wine" -- which may or may not be a compliment -- the film had its premiere at Cannes and is reputed to decry the effects of internationalism on the wine business, contrasting huge operations such as those of Robert Mondavi with li'l ol' artisans [les petits vieux artisans] of the French soil.   Advance reviews are mixed.  Steven Malanga, in City Journal, is unimpressed by the film's rhetoric:

But Mondovino’s filmmaker, Jonathan Nossiter, says he wasn’t interested in making a mere movie about wine; he wanted instead to examine larger issues of the globalization of tastes.  Here’s where the movie goes wrong.  Nossiter transforms the clash of terroir versus modern wines, something reasonable people can disagree about, into a simple black and white argument, with Moore-ish potshots along the way at the United States’s crass commercial culture and its homogenizing effects on the rest of the world.

Mondovino sets any reasonably skeptical person’s humbug detector off immediately because of the ham-handed way Nossiter proceeds.  For instance, right after Robert Parker, the famous wine critic whose tastes many believe are determining how modern winemaking is evolving, describes how he feels he helped change the wine world from one dominated by elitists to something approaching American democracy, the camera pans swiftly to passing billboards of ads for fast-food chains.

Further, the director brings before the camera the Italian and French winemakers who have gone over to the modernist side and asks them whether their families collaborated with the Germans (in the case of the French) or the Fascists (in the case of the Italians) during World War II, as if this were relevant to the wine debate.  Throughout the movie, the modernists appear as collaborators (with American tastes, now) and the traditionalists as members of the resistance.

Malanga's piece is entitled "Antiglobal Terroirism," so it is worth noting a recent instance of the real thing, an application of what the headline writer puckishly describes as "brut force:"

Dissident wine producers in the Languedoc region of France have raised the stakes in their struggle with the French government, using dynamite in attacks against official buildings in the cities of Montpellier, Carcassonne and Nimes.

A shadowy group calling itself the Comité Regional d’Action Viticoles (CRAV) used the explosives in protest at the diminishing market for their wines and at the government’s offer of aid, considered insufficient to ease the industry’s crisis.

Wine exports from the Languedoc-Roussillon region fell last year by seven per cent in volume and by 6.8 per cent in value. The region has been particularly hard-hit by the current crisis industry, which is suffering from overproduction, a sharp drop in domestic consumption and aggressive competition from New World wines, which overtook French wines on global export markets in 2003.

A fifth of wine exported worldwide comes from France but wines from Argentina, Chile, the United States, South Africa and Australia now account for 23 per cent of international wine business.

Another major problem facing the French wine industry is that the French themselves are drinking less wine. Wine sales have dropped by 20 per cent since 1980.

The link to that story comes by way of Kerry Howley at Reason, who has also written somewhat more favorably concerning Mondovino, under the title "Critique of Pure Riesling".  (That's a very good joke, but I kan't avoid mentioning that it was already used by oeno-philosophe Randall Grahm on a label for Bonny Doon Vineyard.  Hunter S. Thompson protege Ralph Steadman is the artist.  A larger reproduction of the label -- do we detect some Schwitters influences at work? -- is here.  But I digress.)  Says Howley:

Mondovino starts as a mournful elegy for fine wine, but it's too smart, or perhaps too honest, a film to end that way.  Instead, wine emerges as an experience open to invention and reinvention, a nebulous pleasure that can be captured only fleetingly in the strained metaphor of a critic or the romance of an Italian estate before it is reconceived as something wholly different.  Connoisseur Lawrence Osborne claims wine is '99 percent psychological, a creation of where you are and with whom.'  That's a profoundly empowering concept for a beverage once thought to be the province of elites, whether they be crass American businessmen or cranky European farmers.

More Mondovino-related links for your free trading or freebooting pleasure: 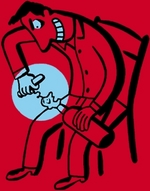 The film's French site features the very French logo on the left and a series of stills designed to make Robert Parker and the Mondavis look as sinister as possible.

Unrelated to the film, "Mondovino" also turns out to be the name of a Belgian wine distributor whose site features noisy crickets.

Update [1310 PDT]:  Welcome Roger L. Simon readers, and many thanks to Mr. Simon for the link!   It's like receiving an Insta-lanche, but with better hats.

My take is that Nossiter offers a simplton's view of wine and the current politics of wine. It is like Michael Moore's film insofar as it really has no time for reason or truth...just pure polemics.