Home Archives Profile Subscribe
Horrors!
We Raise Our Hats to the Strange Phenomena

Morel Values, or, Adventures of a Truffle Trifler 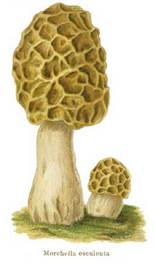 H.L. Mencken famously defined Puritanism as "the haunting fear that someone, somewhere, may be happy."  We might just as well apply that same definition to regulators who act in the name of "public health."  A fresh example pops up today in, of all places, the Food section of the Los Angeles Times.

Meet Terrance Powell of the Los Angeles County Health Department, at the whim of whom it has suddenly become unlawful to sell wild mushrooms at farmers' markets, and possibly elsewhere:

No reports of anyone getting sick from mushrooms preceded the county's action. In fact, there has never been a report from any state or local health organization of anyone in the United States becoming ill from wild mushrooms purchased in a store or farmers market or eaten in a restaurant.

So why the sudden shutdown?  Why just at farmers markets?  And is a ban at restaurants and supermarkets to follow?

Terrance Powell, the environmental ombudsman with the county health department, says he only recently learned, through his inspectors at the farmers markets, that wild mushrooms, indeed, do grow wild.  By definition, they are foraged from forest floors, not cultivated on farms.

There is a dangerous gap in the regulations, Powell says, and that worries him.  "Should we wait to have people get sick? Our job is to be proactive....  Consumers rely on food being safe."

Yes, Powell is shocked -- shocked! -- to learn that wild mushrooms are exactly what they claim to be, and moreso by the terrifying prospect of that "dangerous gap" in the seamless web of regulatory intermeddling.  The article goes on to describe the life of the "circuit picker," as itinerant mushroom hunters are known, introducing us to picker Hippie Mark, "who says he doesn't believe in last names," and to Mike Stephens, who buys the fruits of the pickers' labors throughout California and the Pacific Northwest and distributes them to restaurants and upscale markets.  Stephens points out that Nature is to a large extent self-regulating:

How does Stephens know his pickers aren't foraging on toxic waste dumps or around nasty sludge ponds?  A quizzical look crosses his face. 'Wild mushrooms won't grow where anything's wrong,' he says.  'After a fire, you can tell where they've dropped fire retardant because there are no mushrooms there.'

Fear not, citizens!  Minor details like that don't trouble a health crusader such as Terrance Powell in his quest to do What's Good For You, whether you desire his protection or not:

Concerned for public health, Powell first shut down the wild mushroom vendors he knew about at the farmers markets.  This week, he's getting around to the rest of the county.  Stepping in where no California regulator has gone before, Powell plans to issue new product identification and source disclosure regulations governing the sale of wild mushrooms across Los Angeles, including distributors, wholesalers, retailers and restaurants.

If Powell has his way, before consumers take their first bites of this spring's fresh morels, they will know exactly where each wild mushroom grew, who identified it as a morel, and that person's qualification for the job of mushroom identifier.  A 'buyer beware' notice will be posted at points of sale to warn consumers that the mushroom grew on land that is not regulated by the Department of Agriculture or Health Services 'and therefore was subject to conditions that may potentially contaminate,  adulterate, or otherwise render the product unfit for human consumption.'  As a bonus bit: Consumers will be told that the Latin binomial name for morel is morchella esculenta.

True, the health risk is strictly theoretical, Powell says, but throughout the years, several amateur wild mushrooms foragers have gotten sick and some have died.  Powell believes it is just a matter of time before a commercial forager makes the amateur's mistake.  He's acting now, he says, to forestall disaster.

No one has been injured by a commercially purchased wild mushroom.  This can only mean that it could happen at any moment!  (Try applying that logic to a slot machine sometime -- one that hasn't shown any signs of paying out recently -- and see what it gets you.)  Note as well that anything not grown on land regulated by one agency or another is by definition exposed to conditions making it unsafe.

Now, let's pull back to a wider view.  Is the creeping menace of unpedigreed fungi being dealt with elsewhere?  Powell envisions a much broader regulatory push.  Witness the slippery slope in action:

The urge to regulate happens frequently when officials first discover the peculiarities of wild mushrooms, says Dave Bengston, Mendocino County agriculture commissioner.  And just as predictably as they try to regulate them, he says, they drop the idea.  'In my mind, mushrooms are like any other fruit or vegetable, common things we eat all the time that, treated improperly, are poisonous,' Bengston says.  'Fix rhubarb wrong, it's the same thing. And you don't see a lot of people panicking over rhubarb.'

Mendocino County hasn't regulated its foragers, Bengston says.  With the slump in the local lumber industry, mushroom foraging saved Christmas for more than a few families.  'We've had discussions, but we felt that no one has the time to do it,' he says.

As for Los Angeles County, Powell doesn't care what has happened elsewhere; as far as he is concerned, his new interim rules should stand as law until the state decides whether to act.

And what does the state say?  'We don't know what the county is doing,' says Robert Miller, spokesman for the California Department of Health Services.  To date, Powell has not notified the state of his new regulations.

According to Miller, the state would like to see a requirement that foragers go through a training and licensing program.  But because wild mushroom commerce crosses state lines, he says, 'we're waiting for the federal government to act.'

I, for one, will rest easier knowing that I am protected from the rogue spawn of spurious spores, won't you?

For further reading:  On a more serious note, what we have here is another example of throwing resources at a perceived risk far out of proportion to the degree of that risk.  The phenomenon shows up everywhere and is hardly limited to California or even the United States.  Even that clever fellow Tony Blair has expressed dismay, albeit he has not yet weighed in on the Mushroom Problem.

There are naturally toxic mushrooms that appear identical to those that are safe. These mushrooms generate toxins without the influence of man. Bravo to Mr. Powell for his foresight and thoughtfullness.