"Shiraz," as your gazetteer will tell you, is an ancient place in what is now Iran. Shiraz is also a grape, named for the region in which it was first cultivated a millenium or so back, also commonly known by its French name, Syrah. In France, Syrah is one of the essential red grapes of the Rhone, and is always called "Syrah." In Australia, the grape is widely grown, and is nearly always called "Shiraz." In the U.S., particularly in California's Santa Barbara County, the grape is also widely grown, though we Americans can't seem to make up our minds which of the names we prefer. (And Petite Sirah is something else altogether. But that's not important right now.)

Shiraz in Australia has gone through a stylistic shift in the past twenty years or so. Once upon a time, Australian Shiraz was often marked by a leathery "sweaty saddle" quality. With repeated consumption -- especially in a small space of time, the better to impair one's judgment -- those wines could actually become enjoyable. Occasionally, that character still displays itself in Shiraz wines from the Hunter Valley, north of Sydney, but it generally does so only by mistake.

Contemporary Australian red wines, and especially those made with Shiraz, often draw the description "fruit bomb," referring to the intensity of their flavors and those flavors' enhancement (if that's the word) by relatively high levels of alcohol. At their best, these wines can be explosively pleasurable. Often, they come across as Just Too Much, powering through by brute force and leaving you plucking the shrapnel from your palate. (Enough of that metaphor, eh?) 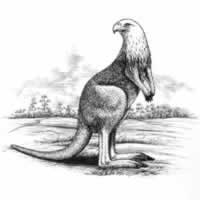 Over the weekend I had the opportunity to sample the 2003 Shiraz from the Marquis Philips label. Marquis Philips is a collaboration between Australian winemakers Sarah and Sparky Marquis and U.S. importer Dan Philips, and the grapes originate from South Eastern Australia. The Wine Spectator, for what it's worth, awarded this wine a rating of 90 on its 100 point scale. I bring it up because it meets the principal criteria for mention on this weblog: (1) its price is very reasonable for what you get (somewhere toward the lower end of the $15-$20 range) and (2) I really liked it.

The 2003 Marquis Philips Shiraz is what might be called a "smart fruit bomb." It grabs the attention immediately with ripeness, lusciousness and berry flavors galore, all held together (and this is what I most enjoyed about it) with the cleanest, clearest essence of black pepper you could ask for. It is not for everybody, and it absolutely needs the accompaniment of a hearty meal, preferably in cold weather, but it is a rip-roaringly delicious example of its kind, combining power with precision. (Now we're done with the metaphor.)

The not-at-all timorous beastie above and to the left adorns the front label of all the Marquis Philips wines, and the explanation on the rear label suggests that this may be the perfect wine for the neo-con in your life. (Red wine for Red States?):

The mythological creature on the front label, the Roogle, represents the lasting friendship and the shared destiny that link our two countries.

There's no tyin' me Roogle down, sport.

A Roogle? Quaint and forgotten species, it is *grin*. Don't forget his brother, Jackalope. Texas Hill Country has some fine wines, too!