Gettysburg 1: A Monument of the Battle

Another anniversary: the third and final day of the Battle of Gettysburg took place 141 years ago today. While the day is probably best known as the occasion of Pickett's Charge -- the so-called High Water Mark of the Confederacy -- there was abundant action elsewhere on the field, including a hard-fought early morning exchange at Culp's Hill.

Among the participants for the Union that morning were the men of the 1st Maryland Infantry (Eastern Shore), under the command of Colonel James Wallace, my great great grandfather. As with most of the units that participated at Gettysburg, a monument stands near the location at which they saw action. Here it is: 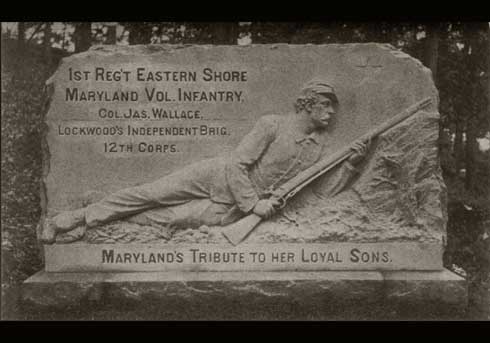 Two interesting incidental facts about the 1st Maryland, found here: Day 3 at Gettysburg was the only occasion during the war that the unit actually saw action, and on that one occasion they actually found themselves firing upon men they knew personally: members of the "1st Maryland" of the Confederacy. The Confederate Marylanders' monument is located nearby. In an example of history being written by the victors, and in the interest of avoiding confusion with the Union's 1st Maryland, the Confederate battalion is referred to as The 2nd Maryland Battalion, CSA.

[Photo of the 1st Maryland (Eastern Shore) monument found at Virtual Gettysburg. It is apparently an older photo; in reality the figure on the monument, like the sculpted pharaohs of old, has been missing much of his nose for at least the last several decades. He is an idealized warrior and not, so far as I know, intended to portray any particular member of the unit. He is definitely not Colonel Wallace, who sported a full beard.]

I love finding my ancestors that fought in the War of Northern Aggression. I have my gggrandfather's Confederate Pension papers that give me a wealth of information about his service.

Are you familiar with the Parks website for Civil War Soldiers:

Mr. Wallace,
Found you on a search for references to 1st Eastern Shore MD Infantry, and other Civil War units who were likely camped in Cambridge, MD. Since you're descended from Col. Wallace, perhaps you have some direct knowledge? I'm attempting to verify the locations of one or more training camps near Cambridge, MD, hometown of Col. Wallace. Would appreciate any insight you might have.
Thanks
Kim

I WAS NOT AWARE OF ANY OTHER DESCENDANTS OF COLONEL JAMES WaLLACE. I AM JAMES WALLACE BRYAN JR. MY GRAND FATHER WAS DARCY PATTISON BRYAN WHO MARRIED NANNIE WALLACE, ONE OF THREE WALLACE DAUGHTERS. ONE WAS MYRA PHELPS DAWSON, THE OTHER WAS ELIZABETH WALLACE MARRIED TO SAMUEL L.GRAHAM. I WOULD VERY MUCH LIKE TO GET IN TOUCH WITH ANY OTHER DESCENDANTS OF COLONEL JAMES WALLACE. KINDEST REGARDS, JAMES W, BRYAN JR.