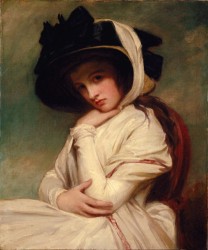 It has been a week now since I slipped away (last Friday afternoon) for a visit to the Huntington Library, Art Collections, and Botanical Gardens for the soon-to-close -- Run, Angelenos! Sunday, April 4 is the last day! -- William Morris exhibition, and I haven't written anything about it. The omission is not the result of a lack of enthusiasm for the exhibition -- which fully lived up to my expectations -- so much as it is the consequence of a sort of performance anxiety: what can I say that is sufficiently clever to satisfy the demands of my miniscule but refined readership. "It was a really, really nice show" simply won't do, even though it's true. I'm thinking I may set myself a challenge, such as somehow tying William Morris in with the current debate over job losses and outsourcing.

Not having risen to this challenge yet, I will simply report that my vist gave me a chance to get reacquainted with the peculiar strengths of the Huntington's core collection. They are a bit of an acquired taste, but if you have any inclination to late 18th Century English portraits, the Huntington is the place to go. Gainsborough, George Romney, Sir Joshua Reynolds and their contemporaries are all well represented, as are a number of the leading families of the English aristocracy. The Spencers are there, for example, some two centuries before the public fell for Princess Diana.

One portrait that I had forgotten but that I particularly like is reproduced in miniature above (and you can click through to a larger version on the Huntington's site). It is displayed in the same large room as the Spencers and "Mrs. Siddons as the Tragic Muse" and the just-too-awfully-famous Blue Boy and Pinkie and is smaller than any of them. This is a Romney portrait of the young Emma Hart, later Lady Hamilton, famed for her eventual passionate attachment to Lord Nelson and one of the subjects of Susan Sontag's novel (which I recommend) The Volcano Lover.

Miss Hart was a favorite model for Romney during the period prior to her departure with Sir William Hamilton, British ambassador to the Kingdom of the Two Sicilies, for Naples, where she met up and coming naval hero Horatio Nelson, et cetera and so forth. The artist's fondness for his subject is apparent. Further evidence may be had in another Romney portrait in the collections of the British National Maritime Museum at Greenwich, which you can view here. More on Emma Hart and the triple-play combination of Romney to Hamilton to Nelson can be had, courtesy of the National Museums Liverpool, here.

In fairness, let us not fail to give Sir William Hamilton his due as an enthusiast for Vesuvius and a good man to know if you were a young man making the Grand Tour. (There's always room for one more link, isn't there?)

Memorandum From the Department of Synchronicity:
What do George Romney and the proprietor of this Foolish weblog have in common? They bear the same names as two well-known U.S. state Governors of the 1960's: George Wallace of Alabama and George Romney of Michigan. A meaningless coincidence to be sure, but we offer it as an appropriately meaningless conclusion to this post.